I love the film community that is steadily growing in Mississippi.  Thanks to the work by the Mississippi Film Office, there is a continuous stream of films (with a budget and well-known actors!) being filmed in and around the Magnolia state.  This growth also leads to more opportunities for up and coming filmmakers, like my Feature Friday person – Alex Warren.

Alex and I met several years back thru his father, fellow filmmaker and jib operator, Don Warren.  Because we both grew up in and around this “unique” lifestyle of media, we immediately hit it off.  I am so happy to share with you all this week about his latest project – SEQUENCE.  As Alex explained,

“Sequence is a series of four short films about junkyard workers, middle-aged drunk women, hyperactive alcoholics, Priests, and amateur artists. None of the stories cross-pollinate in regards to characters, none of the stories are necessarily connected, but I’m showing them altogether and calling them Sequence because that was the intention from the beginning.”

I have enjoyed watching Alex’s career grow and his knowledge develop.  Here are some of his other thoughts.  Be sure to check out his latest project Sequence by going to SequenceTheFilm.com.

Why film?  My dad is a filmmaker, so I grew up around that culture. Going to sets, being in edit rooms, seeing gear all the time. I didn’t really think it was for me. I was way more interested in music. I became really interested in acting at an early age but couldn’t quite figure out how to make it happen for myself, so I decided to focus solely on music. Shortly after high school, I started touring with a band. I bought these Director’s Label DVD’s of the early work of Spike Jonze and Michel Gondry….short films, music videos, documentaries. These guys seemed to be a lot like me and they were making these cool movies and I wanted to do that. I already knew how to edit (Dad made me learn), so I started writing and putting together shoots and calling myself a director. 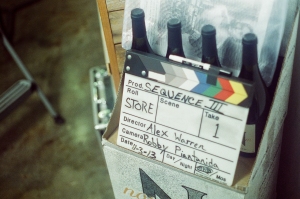 What about your creative hero? I guess in regards to cinema, my hero is John Cassavetes. My ideas about directing actors and writing were heavily influenced by him and his work. He was after true moments, whether funny or intense life-and-death experiences. I want to write material that actors are able to sink their teeth in on. It becomes something that we’re experiencing together, in a director and actor relationship. It becomes a common experience that we’re both drawing from. I know Cassavetes experienced that with his wife, Gena Rowlands. I know he experienced that with Ben Gazzara and Peter Falk when they were making Husbands. I cast actors that I can experience that level of honesty and openness with. Cassavetes’ movies are sometimes hard to watch and he’s not the most elegant of all directors, but I feel like he was the bravest and a complete pioneer for cinema.

Where did the idea for Sequence come from? Did it turn out how you initially hoped or is something fundamentally different? Sequence is a series of four short films about junkyard workers, middle-aged drunk women, hyperactive alcoholics, Priests, and amateur artists. None of the stories cross-pollinate in regards to characters, none of the stories are necessarily connected, but I’m showing them altogether and calling them Sequence because that was the intention from the beginning. Sequence stars different actors from New York, Los Angeles, New Orleans, Toronto and parts of Mississippi, where we shot and produced all four of the films. It’s supposed to work—in my head, at least—like Brian Eno’s Ambient series, or Eric Rohmer’s Six Moral Tales. Or even the short story collection What We Talk About When We Talk About Love by Raymond Carver…the idea of a body of work that comes from a theory, a certain style and a certain ethos. That’s what Sequence kind of is. They also work as individual movies without playing side by side. I learned a lot, as you do with every new project you take on. The project was an exploration and the trajectory of where we were going to land with the film was vast, so I can’t say if the project turned out the way I thought or not. It was a process and it was a lot of work but it was great fun, too. 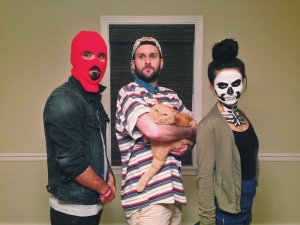 What one piece of business and/or legal advice do you know now that you wish you had known when you first started out? Work with people who understand business and taxes better than you do.

Is there a quote or philosophy that you adhere to when taking inspiration from other creative works? Jim Jarmusch said “Nothing is original. Steal from anywhere that resonates with inspiration or fuels your imagination. Devour old films, new films, music, books, paintings, photographs, poems, dreams, random conversations, architecture, bridges, street signs, trees, clouds, bodies of water, light and shadows. Select only things to steal from that speak directly to your soul. If you do this, your work (and theft) will be authentic. Authenticity is invaluable; originality is non-existent. And don’t bother concealing your thievery – celebrate it if you feel like it. In any case, always remember what Jean-Luc Godard said: “It’s not where you take things from – it’s where you take them to.”

Overall, a piece of advice for someone interested in entering your field? Watch a lot of movies, like what you like, try to find inspiration daily, lead a spiritual life, understand the weight of making a movie with no money, write down all of your ideas and dreams into the Notes app on your phone, drink a gallon of water every single day.

I appreciate Alex taking the time to tell us about his thoughts and the premiere of his latest project Sequence.  You have plenty of opportunities to see this film, even if you do not live in Mississippi!  It premieres in Oxford, Mississippi on December 3 at 7 p.m. at the Oxford Commons with an after party at AJAX.  Then, on December 4, you can find it in Jackson, Mississippi at the Malco Grandview in Madison starting at 8 p.m., followed by an after party at Hal and Mal’s.  If you are in Los Angeles, catch it on December 11 at Cinefamily.  On December 18 you have a chance to see it in New York City at Anthology.  Future screenings are planned, so make sure to signup on the film’s website to receive updates.

Online you can keep up with Alex and Sequence by visiting SequenceTheFilm.com.

Thanks again to Alex.  I cannot wait to see what is next for him and where his career will take him.  Be sure to share this post, his project, support independent film, take part in the Comments section below and Stay Tuned In!