I died and went to trademark heaven. The walls were lined with red. There was distinctive cursive writing everywhere. Curvy bottles to reinforce memories from long ago buried in our head. 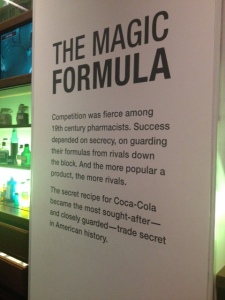 The House of Saucier took a trip this past week to Atlanta. The Hubs and I had separately visited the World of Coca-Cola museum when we were both children and when it was located near underground Atlanta. Since it had been several years, we decided to visit the new site in Pemberton Park. The change in locations mirrored the change that has taken place in my knowledge base.

I immediately realized I was in a place in my life where I simply know too much. Don’t get me wrong the experience was fun, memorable and I am so glad we went. However, the experience from this past week as an intellectual property attorney was worlds away from the experience I had as geeky 11-year-old Ryanne. 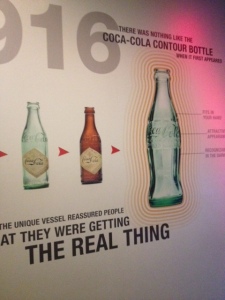 Transition of the trademarked Coca-Cola bottle

My memories of visiting the original location with my parents and grandparents consisted of looking at memorabilia, watching some of my favorite commercials, consuming as many Coca-Cola products from the around the world as my body (and my parents) would allow, and learning the history of how the product was made and eventually bottled. As a child, I left with that happy feeling only a Coca-Cola and time spent with family can give.

By contrast, I was immediately swimming in intellectual property and contract law. In every turn there was reinforcement of the mark thru visuals, whether it be with the trademarked logo or the history of the bottle shape that is also subject to trademark protection. All the displays are carefully constructed to reinforce the brand and reinforce the value of the trademark and the trade secret.

All of the exhibits seem to have one goal in mind – reinforcement of the trademark and to give visitors such ownership in the brand that they, too, will want the genuine product. Throughout the tour, visitors find themselves in a room where the vault where the trade secret of the formula for Coca-Cola is supposedly stored. (By the way, while that is a neat little aspect, this intellectual property attorney ain’t buying it.). A 4D film is shown that drives home the point that no one knows the trade secret formula. The film goes the extra step by telling the audience that each of us, YOU, is what makes the brand so special. Below is video I captured where a hologram shows how others tried to knock-off the distinctive Coca-Cola trademark.  All of the other trademarks are placed on the bottle, but all are shown to be an imposter to The Real Thing.

Perhaps that is what is so great about a strong trademark. I had changed, but the brand, the trademark and feelings of happiness I had with my family as a child had not. I even called my Dad afterwards and asked, “Was the World of Coca-Cola always like this? Was the brand so heavily reinforced? Because I don’t remember that.” To that, he laughed and said, “Yes, but you were a little girl who just loved Coca-Cola.” This past visit was with my new family and created new memories. I am starting to think Coca-Cola is right. What makes a great mark isn’t about the formula, the graphics or the words, but rather the experience each of us has with a product while spending time with our families. Maybe I’m starting to realize why I was drawn to this pop-culture field?

Have you ever found yourself at a place where you simply know too much but are completely changed?  How did your views change?  Take part in the Comments section below and Stay Tuned In!

5 thoughts on “I Died and Went to Trademark Heaven”