The big film news this week was author E.L. James’s announcement via twitter that a trailer for the much anticipated film Fifty Shades of Grey, set for release in February 2015, would be …[ahem – clears throat] … “released from bondage” to the masses later this month on July 24. While shopping in Target this week, I ran across a wonderful example of parody that involves the bestselling novel.  There was Fifty Shades of Chicken sitting right beside Fifty Shades Freed. 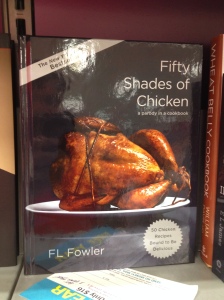 As if things were not confusing enough, in the Campbell v. Acuff-Rose Music case the Supreme Court found that parody falls under the idea of Fair Use.  The Fair Use doctrine is a limitation on the exclusive rights.  As the statute outlines in §107, there are uses that are more favored and will not be considered copyright infringement if it falls under criticism, comment, news reporting, teaching, or research.  In the Campbell case the band 2 Live Crew made a parody of Roy Orbison’s song “Pretty Woman.”  2 Live Crew’s version changed the lyrics to comment and criticize the viewpoint on women the original song took.  The Court continued by adding that parody’s were transformative uses because the parody authors added independent creative elements.  The Court also said it would fall more in the line of parody, if you are to look at the market harm.  Finally, just because a parody might have a commercial effect does not lead to an inference of commercial harm.  Does the Fifty Shades of Chicken book find itself on the side of parody or on the side of copyright infringement?  To me, it falls on the side of parody.

From viewing the two covers quickly, one might assume the two products are related and are possibly by the same author.  However, that does not mean it is copyright infringement.  As the Campbell case pointed out, for a parody to be a parody certain aspects must be used from the original.  There is no doubt that the covers of the Fifty Shades of Grey books are original in their layout, color design and scheme and are subject to copyright protection.  The covers were original in concept because unlike other books with adult themes they did not feature scantily clad women and men in the throws of passion, not to mention the creative choices made in font, layout and overall design.  Rather, the covers had a more discreet message.  There is no doubting the Fifty Shades of Chicken cookbook borrowed and used the same concept from the Fifty Shades of Grey book covers.

The strongest argument for finding parody relies on the transformative use.  The original books were works of fiction.  While a movie, translations and soundtracks are all logical derivative works, a cookbook might be too attenuated.  While I did not read or even pickup the cookbook, I think it would probably fall in the line of criticism and comment based on how women in society are viewed.  When the original Fifty Shades of Grey books were released they were deemed “mommy porn.”  The criticisms around the books is that the main character is objectified and made to be subservient to a man, thus diminishing the role, status and places women have gained in society and within their households.  Because cooking was originally viewed as a more “traditional” role and the responsibility for women, a cookbook is a logical choice to make if you want to criticize the message the Fifty Shades of Grey books give.  To create a cookbook with a similar title serves as a criticism and comment on the original books and how they portray women, specifically the lead character.

Do you think the Fifty Shades of Chicken cookbook is more of a parody or it could have been a derivative work of the original author?  Take part in the conversation below and Stay Tuned In!