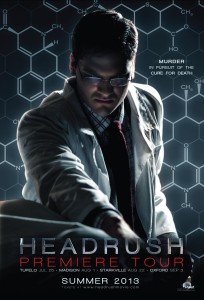 Headrush – often equated with standing up too fast and getting extremely dizzy while becoming lightheaded. HEADRUSH is also the soon-to-be released film from young Mississippi filmmaker Johnson Thomasson. Unlike some of my past Feature Friday subjects, Johnson and I have not actually met. He was recommended to me by one of my readers and as someone to watch. In his short career, he has already earned awards on several of his projects. After getting to know him a little better, I am definitely excited to see the release of his film on August 1. I am also excited to see where his talent will take him.

How long have you been in the business? I started making short films around age 15. I’m 26 now, and for most of my young career, I’ve worked purely for self-expression, personal practice, and the chance to wow my friends. I’ve only become business-minded in the last few years. Blood Feud (2009) was created as spec trailer, basically an extended preview of a feature film project that I’d like to produce one day. HEADRUSH, releasing later this month, was made for $30,000 and I do have some aspirations of making a small return on it as well as using it as a calling card for a feature film project. In one way it has already paid off: I got into the graduate film program at USC largely on the strength of HEADRUSH.

Who are your major influencers? Christopher Nolan, Martin Scorcese, Edward Zwick, Ridley Scott — basically directors who can handle big ideas inside of big, fun blockbusters that are accessible to wide audiences. The guys who can please the critics and the masses simultaneously are my idols.

Outside of filmmakers, who is a creative hero? In all of the creative fields, my hero is Bono. He’s a polarizing figure, but I think you can see that he’s cut from the same cloth as my favorite directors. He’s another artist who weaves provocative spiritual and philosophical themes into works that are widely palatable. And going beyond that, he’s walked the talk his entire career – I daresay hardly anyone has had a greater positive impact on the lives of the world’s poorest in the last twenty years than Bono.

What aspect is the most challenging part of what you do? The logistics of a film shoot are incredibly challenging. On a larger production, there would be division of labor and a whole team of people would manage logistics, but on a project like HEADRUSH, the buck stops with me. So, between the creative tasks of storyboarding and working with actors, I have to think about what my crew of 25 is going to eat, where they’re going to eat (do we need to bring tables?), where they’re going to sleep, what happens if it rains, where do people use the restroom, who’s going to drive the grip truck, do we need a generator, and how does all this fit into the budget? And after you’ve worked hard to find answers to all those questions, your lead actor’s car breaks down somewhere between Eupora and Kilmichael (not a true story)… It’s like Jenga, the whole thing could fall apart with one phone call. Very challenging.

What are some of your past projects?

What one piece of business advice do you know now that you wish you had known when you first started out? It’s not hard to start and manage an LLC as a sole proprietor. It’s also very beneficial in that it allows for the clear separation of personal and business expenses, protection from liability, and the ability to do business in the company name. This past tax season, I was so glad that I formed Dog Canyon Films, LLC to produce HEADRUSH because it made what would have been a complicated mess fairly simple.

Where did you get the idea for your latest project HEADRUSH? HEADRUSH has been stewing for two years now. The story began with a handful of inspirations, among them the universal feeling of shame and helplessness when you know you’ve messed up and hurt someone you love and there’s nothing you can say to fix it. I took that emotional context and combined it with some cutting edge science: at the time I was reading about research in hypothermic suspension, the process of lowering body temperatures to temporarily suspend biological processes thereby slowing the damage done by, say, a heart attack. I took that real research and pushed it into the realm of science-fiction to suit my story needs, and the characters and settings fell into place from there. The result is a 45-minute murder mystery with a touch of science-fiction set in a dark laboratory on a stormy night. It’s thought-provoking and thrilling!

What was the best part about working on this past project? The best part of making HEADRUSH was working with a great cast and crew (all Mississippians). I love collaborating. As a director, it’s not necessarily my job to always have the best idea. I spend time evaluating the script, and I generate ideas for how lines should be delivered, how scenes should be lit, how the music should sound, but in the course of making the movie, a lot of good ideas come up. It’s my job to pick the best one, no matter who came up with it. That’s why it’s such a great joy to work with talented people; my ideas are constantly being outshined, and the end result is a better movie!

How will you know when you have made it? When I have paid off my student loans with money earned in the film business! In all seriousness, as an artist, if you find a way to make a living doing what you love, you have made it.

Any books or websites or resources you would recommend? Celtx is free, open-source screenwriting and preproduction software – I use it all the time, it’s the Swiss army knife of filmmaking software.

The Pocket Lawyer for Filmmakers by Thomas A. Crowell is a book I reference frequently in all phases of production.

Producer to Producer by Maureen Ryan is another good one.

Goals you have for the future? I’ve got my sights set on making my first feature three years down the road when I get out of grad school. I’m already scheming, but I can’t tell you about what. I will say I would love to make my first feature here in Mississippi. Beyond that, I’d like to get established as a director doing a mix of indie and studio films and eventually own my own production company and studio somewhere in the Southeast.

Now to the not so serious questions …

Hobbies? Ultimate Frisbee! I played on the Mississippi State club team in college, and still play pickup two to three times a week. My knees are starting to creak though!

Charitable organizations that you support? My wife and I support WorldVision and the ONE campaign. However, we are very much still in the starving artist phase.

In the meantime, you can find him via Twitter @OfficialJohnson, email johnsonthomasson@gmail.com and stopy by the HEADRUSH website at www.HeadrushMovie.com.

Do you have someone that you think would be a great feature on Feature Friday. Drop me a line on the contact page or find me on Twitter @RyanneDSaucier. Stay Tuned In!